In August 2014, the construction company YIT launched the construction of a new bridge over Pasila’s former railway yard as part of the wider central Pasila construction project. YIT Rakennus ordered the large steel support racks needed to build the bridge mould, which is approximately 185 metres long, as a turnkey service from Telinekataja. The sloping shape of the bridge and the high support height created some challenges while implementing the scaffolding. 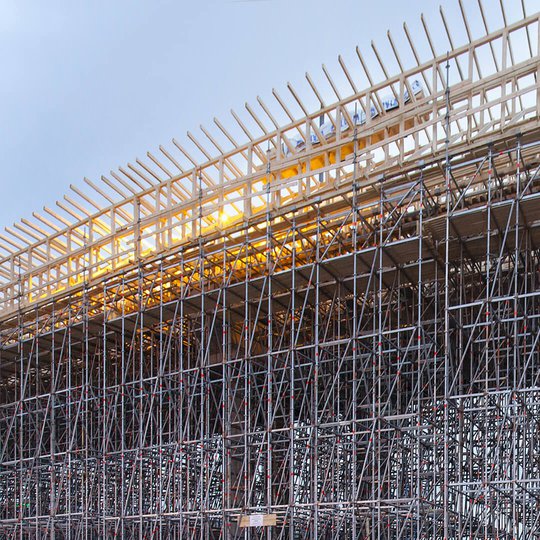 Telinekataja provided their experience as a scaffolding caterer in taking care of the large steel support racks for the construction of a bridge mould that is about 185 metres long.

The use of steel scaffolding racks is much more efficient, especially for high height racks. 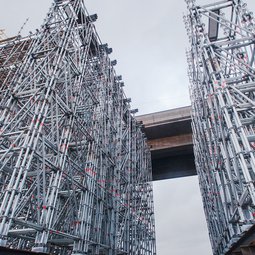 At the Pasila city centre block, the Pasila station will be renovated, and a new shopping centre, a parking garage and about 700 new apartments will be built. The main contractor, YIT Rakennus, decided to use steel scaffolding to support the bridge mould.

“The choice of steel racks was primarily influenced by the high support height of the bridge fashion and the search for the best possible option for occupational safety. It was also very important to us that the supplier of the scaffolding has experience in implementing similar scaffolding systems,” says Mikko Saresma, Foreman at YIT Rakennus Oy. “The new bridge formed a unified bridge deck with the existing, adjacent bridge. It brought particular challenges to the construction process, because the “play” of the bridges had to be managed as separate entities, despite a single cover.”

The project progressed in close cooperation

The height of the 14-metre-wide support rack under the bridge mould ranged from 6.5 metres to 11 metres. The installation of the support rack, weighing approximately 500 tonnes, began at the job site in mid-October. Layher Allround scaffolding and TG 60 support towers were mainly used, of which there were 211 in total used in the scaffolding. ART support towers, which have a stronger load capacity were used for the two traffic openings below the bridge.

“We started preparations related to fleet management well in advance, already in September. In such a large-scale project, it was necessary to have an optimal amount of equipment at the site, all the time,” says Ville Valkonen, Telinekataja Foreman . “The actual work started with the onboarding of the people working at the site, in which attention was paid to occupational safety and the specific characteristics of the construction site. Throughout the project, we worked closely with the client and the contractors working on-site.”

The support rack, which has a volume of approximately 24,000 cubic metres, was completed in two months. “Telinekataja’s installation team performed the construction well on schedule and with limited resources, without compromising occupational safety,” Saresma says. “The Telinekataja logistics worked well, and the contracting of the whole project proceeded on schedule.”

Due to the soft soil, a lower rack about a couple of metres high was erected under the actual support rack. The design of the bridge mould and substructure was made by TAK-Plan Ky, an engineering firm. “The foundation conditions varied at both ends of the bridge, where the end supports had been mined into the rock and the intermediate supports had been made with drill piles up to 33 metres deep,” says Saresma.

“We went through the plans with our entire design department to ensure the best possible stand for the site and the customer’s needs. The design was made challenging by the rise of the bridge deck and its sloping shape. The accuracy in the measuring of the supports also required special care and expertise,” says Aki Parkkinen of Telinekataja, who was responsible for the design of the supports. “Smooth cooperation between the bridge mould and bottom rack designers was very important for the success of the entire project.”

The scaffolding plan was fine-tuned as the project progressed to include traffic entry points under the bridge. The lower rack beams and initial support also brought changes to the original plan. A staircase tower was also connected to the scaffolding, along which the bridge builders could move. “Layher’s fleet can also be connected to safe access bridges and rails,” Valkonen continues.

“Steel racks are very likely to displace timber as support racks for bridge fashions. This will happen especially in higher support rack scaffolding. It's only a matter of time, says Saresma.” 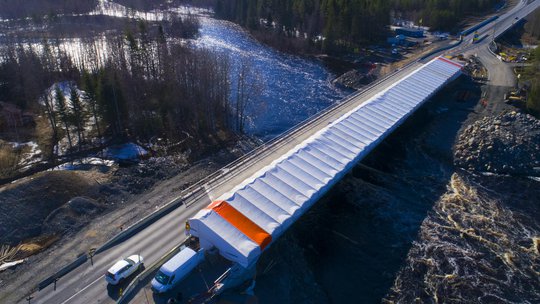 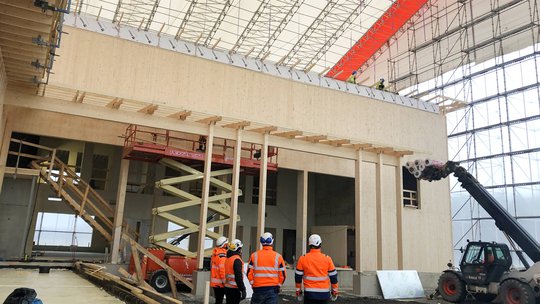